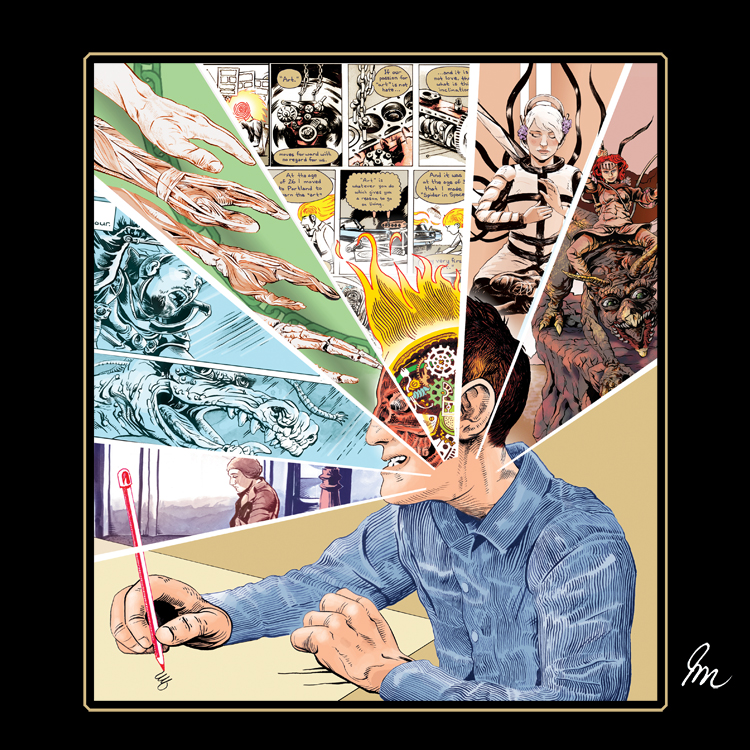 My name is J. James McFarland. I am an illustrator, designer, and storyboard artist.

I am a comic book artist, and a packaging designer.

I have clients, a reputation, and a following in three major cities. Seattle, Portland, Denver.

I have been a guest on numerous podcasts about independent publishing and design.

I have been involved in politics on the county level on several occasions. I have a vested interest in politics, understanding politics, and helping people to see through partisanship in politics. I am a conservative.

What is Tangential Vision?

I have been in business as a freelance illustrator and graphic designer for over ten years, nearing fifteen years professionally. During this time I have had the pleasure and benefit of working for such clients as General Motors, Reverend Freakchild, Treetop, a municipal hospital as their sole graphic designer and chronicler of equipment and facility machinery.

I have worked on a freelance basis onside of successful professional design firms.

Why the change in direction from J. James’ Design & Illustration to my new company Tangential Vision Ltd?

It is very difficult as a conservative to work in the illustration and graphic design fields. Many of the projects that I am brought on to and many of the clients whom I have completed work for have been either liberal or as far left as openly Communist. In recent years this politicization of the work I have been asked to do has increased exponentially.

In recent years I have had to turn down many projects because they conflicted with my belief system on a deep level. These include projects such as the infiltration of the Engineering educational field on college campuses, in which the client desired to use my art to help explain to engineering students why they should take the money from the client but not complete the work. This includes commercials which were openly biased and included lies in the scripts about the nature of conservatives and conservatism.

This also includes several projects where the role was intended as outright defamation of either Christianity or of God Himself. Some projects have simply been vehicles for occultist imagery, sigils, and other nefarious Left-Hand Path methods of manipulating or organizing the world.

As these last few difficult years have moved on, and Cancel-Culture’s power has increased, I have come to realize how deeply these projects have affected me spiritually. It now appears to me that we are in the midst of a spiritual battle, of which only one side is correct. As the majority of artists, illustrators, graphic designers, project visualizers and other forms of visual idea engineers rush madly into Communism, they do so leaving no room for conversation, for debate, for any acknowledgement of the shortcomings of their vile religion.

During the last fifteen years but most especially ten years ago in the cities of Seattle and Portland I created many miniature magazines (known colloquially as “zines”) which were intended to bridge the gap between the Left and the Right. I wanted to educate the Left that the Right were intelligent people who had noble goals, thought well of others, and who shared a common vision towards a positive future for humanity. I thought that I would educate conservatives that liberals have a lot of warm ideas and that while the execution is often lacking, their ideas should be heard.

Over the course of that part of my life’s journey, I came to realize that there were some false precepts in my worldview. Not only did conservatives welcome and invite debate and conversation over concepts and ideas but they generally won quite handily.

How did that work out for me?

I came to realize that when I sold my zines to conservatives, those who did not agree with me would contact me and tell me what it was that they disagreed with and try to convince me of the righteous of their views. They did not care if my mind was changed, only that they could express the logic of their argument. However the experience that I received from the Left was not the same in tenor, volume. Instead what I found was that those on the Left when confronted with concepts which might be familiar would lash out angrily, aggressively, and even to me simply selling small zines at conventions, sometimes violently.

Where am I from?

I grew up in a very conservative family with an even more conservative extended family. We did not have many liberal ideas. I went to a liberal arts college where I was mildly indoctrinated with Leftist concepts, however I was often a lone voice challenging authority. In those later years of the 1990s there were still some educators at the universities who were conservative or at least neutral.

My time in Seattle as a bright-eyed young man made me very excited to hear new ideas and to see a variety of ways that people approached life. I could see that there was more crime, recognized that there were problems of inequality, and that there was a morass of anger brewing under the society of the city. It was different than what I saw on the Right. To me at that age as a late teenager all ideas had merit.

During my years in Portland I went very deep into Leftist circles becoming friends with and a student of straightforward Marxists and open occultists. To some degree this is unavoidable if one chooses to be an artist in the city of Portland. Portland is one of the three major capitals of the world for this industry. It is a deep pool of incredible talent.

In Denver I was welcomed by the entire city of illustrators with wide-open arms very quickly. I came to know everyone, all of the players, all of the artists, those who created the projects. All of the clients who hired. How the industry worked in an all new city, a city of Leftists.

Denver is when I also began to realize that perhaps my youthful interest in moving to the big cities, the excitement that I felt exploring dark alleys and side roads and seedy bars, no longer held any interest for me that perhaps I thought that it always would. It was during this era of my career that I realized a difficult fact: my industry was populated with people who did not simply disagree with me on politics, but in fact hated me deeply on an emotional and spiritual level.

After over a decade of losing myself in this friend pool, immersed in the networking and parties with my fellows, seeking out fresh ideas, new techniques, and other people’s views and methods of working in and being a part of this creative industry that I began to realize that they were not interested in the world of illustration the way that I was interested in the world of illustration. I sought out techniques and styles from a variety of artists from around the world. I loved to imbibe the mythologies that they laid out in their stories. I loved to experience new concepts and ideas, and I would weigh and compare these visions.

When the Covid lockdown came, I found myself significantly more busy than I had in some time. The business expanded and my number of clients increased. I found myself generating websites, banners, graphics, posters, animations, illustrations, and book layouts on a level that I had not even matched in my prior height in 2017. I also produced a massive multimedia interactive wedding production for myself and my wife which stands at this moment as the grandest project that I have ever completed with the help of some talented peers whom I brought onboard.

I had to start saying “NO” to the twisted ideological projects which were coming my way at this time. I was being accepted into the elite ranks of the idea generators of the far Left and I was repulsed with all that was happening there-within.

Briefly momentarily I had a poor decision. I decided that if the entire industry of illustration and design were moving away from me, if my beliefs were no longer welcome, if I were to be canceled as I had been so consistently been told that I would be, if I would never work again, if I would never have a client again, then I would do so proudly and without bowing and bending the knee to the violent, racist, insane concepts which were forming on the Left. This mindset persisted only briefly.

A more obvious epiphany hit me. Why not ONLY work for conservatives? Why not only work in furtherance of values which please and strengthen the message of my higher power and help other people in a way that I envision the world being helped?

A VISION FOR YOU

This is my Tangential Vision. Help me be a part of building something fantastic that can stand up to the perversions of the Left.