Benito Mussolini and the Italian Fascists were Left-Wing in nature. This reality may surprise some. This is not through some clever reimagining of history or redefinition of terminology. They knew that they were Left-Wing, spoke of it publicly, and held modern Leftist beliefs.

Benito’s father ran a coffee-shop where the local Socialists and Anarchists would gather. His beliefs were influenced from an early age by Leftist theology. He held a position as a French language teacher, eventually being fired for his radical and violent outlooks. In Switzerland Mussolini became a journalist, writing frequently about radical violent Socialism.

Returning to Italy Mussolini became a member of the Italian Labor Party. He became an editor of a magazine called the Class Struggle. He became Italy’s Socialist demagogue.

Mussolini was a Collectivist. Collectivism includes Socialism/Progressivism, Communism, and Fascism. All three are manifestations of a powerful centralized state, very large governments with bureaucracies. They involve various forms of top-down power and de-localized leadership.

Mussolini denounced the free market and turned the power of the dictatorship government onto private businesses. While not nationalizing the ownership of businesses, he nonetheless enforced state control over the decision-making abilities of the private owners. He called his government “the Corporate State.”

Mussolini wanted the people to carry an allegiance to the state. To him, the word “Totalitarianism” meant giving total allegiance to the state, a state which took care of the needs of the people. His political goals were focused on his powerful centralized government bureaucracy being the answer to the Italian people’s physical, emotional, and inspirational needs. Unity of thought and action of the people through the Totalitarian movement. You might today call this “.”

According to Dinesh D’Souza: “Progressives and Fascists worked together to implement programs to sterilize so-called mental defectives and “unfit” people, resulting subsequently in tens of thousands of forced sterilizations in America and hundreds of thousands in Nazi Germany.”

Leftists will claim that after Mussolini’s time in the military and his injuries that his ideological / theological beliefs changed. However the change which occurred during this time was Mussolini’s friendship with a man named Giovanni Gentile. Gentile was the inventor of Fascism. Be aware of this fact: any time you read an article which claims that Benito Mussolini created Fascism or changed gears from Socialism to Fascism, that article is uninformed. Leftists have owned the academia and media since the days that Mussolini reigned as Duce. In D’Souza’s words: “Progressives detest the facts not because they are untrue but because they don’t fit in with progressive political interests.”

I will write more about Giovanni Gentile later. However suffice to say that Giovanni Gentile was a Left-Wing thinker. He came from the Hegelian traditions, and a philosopher who created the form of idealism known as “Actual Idealism.” This philosophy focused on preserving free agency in the absence of a Higher Power, as opposed to “Objective Idealism” which believed that the world exists without us in it and that reality is not open to interpretation. Giovanni Gentile was a student of Karl Marx, and created Fascism to improve upon what he perceived as weaknesses in Marx’s beliefs. Gentile was an actively-aware adherent of the Left-Hand Path.

Giovanni Gentile was hired by Mussolini and promoted to several prominent positions of Mussolini’s government as he crafted the Fascist ideology / theology.

The thesis of the Manifesto of Fascist Intellectuals bases Fascist revolution upon co-operation between Culture and Politics. This is what we are seeing happening today between the merger of Hollywood Corporate culture creation, Big Tech censorship and messaging, the media / party merger of the Democratic Party and the Mainstream Media, and the weaponization of the ignorance of the youth in BLM / Antifa.

Benito Mussolini had the support of the arts, the liberals, the academics, and the Leftists of his day. If not for the horrors of the Holocaust, Leftists would still proudly declare Mussolini one of their own as they do with mass murders such as Chairman Mao and Pol Pot. 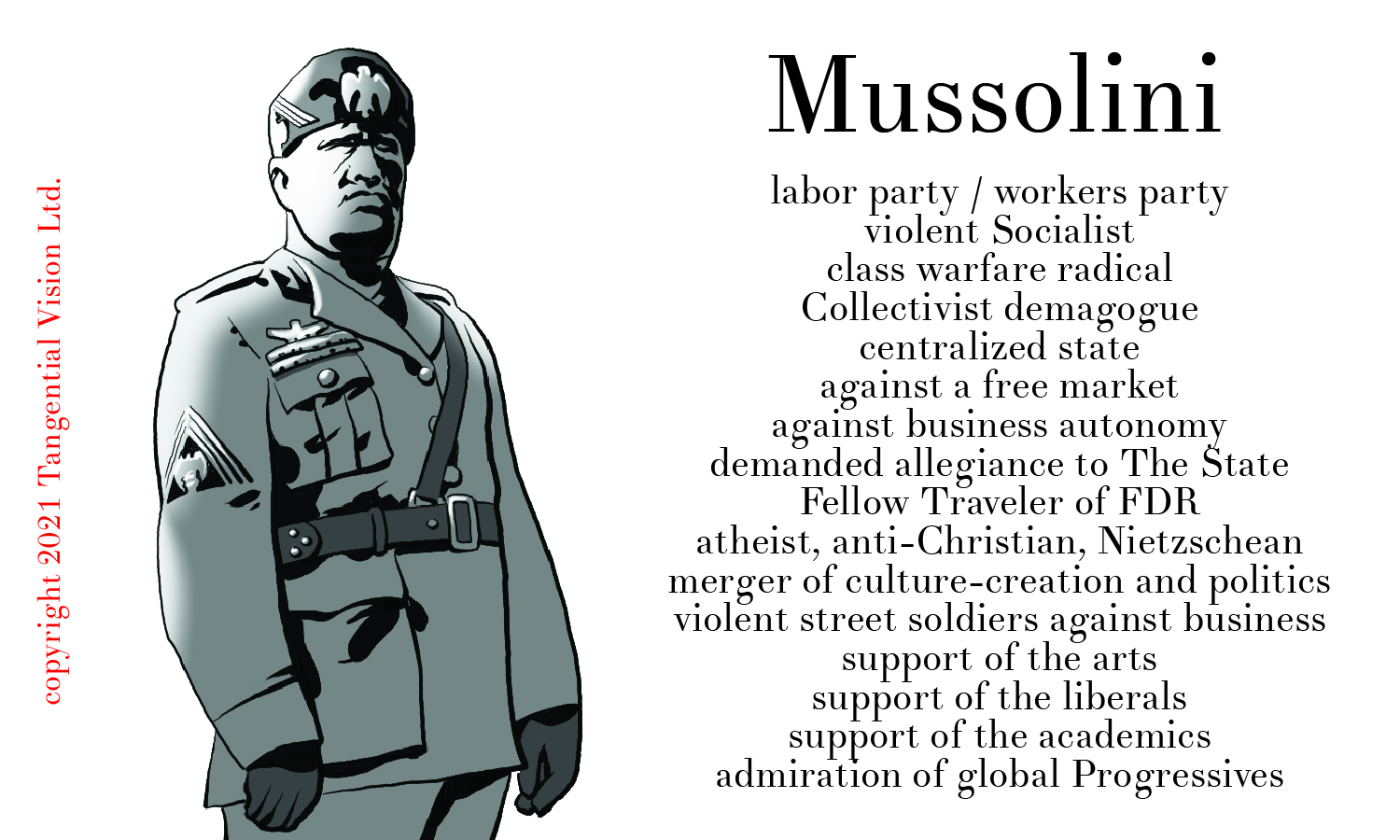