What is the Marxist Messaging Media Machine?

During the 2020 election season I visited my local on-campus print shop to pick up some client work. On the counter was a tall stack of corrugated plastic signs for a protest that weekend. Nearby on the floor there were other stacks of the same sign.

“How many of those are you going to print?” I asked the student employee.

“The order never comes with a quantity. We have to coordinate with a local organizer and they know how many signs they will need.” The student made it clear that this is a common occurrence for protests.

Who tells the print shop how many signs to produce? Well, folks like my first set of roommates in Boulder, that’s who.

Now those guys were some pretty hardcore Leftist activists, let me tell you. A number of men lived in that barely-furnished house. I kept my mouth shut and just observed while they went through the production of their trade. This little group was part of an eco-focused religious group which coordinated volunteer protestors amongst other things. They were (some of) the middle-management of the local faux-grassroots Marxist activity.

Were they what we would call “paid protestors?” Absolutely. They talked openly about getting their checks. Not all Leftist protestors are paid of course, but the organizers are.

They were also, and this is no joke, grooming a young man to be a “global savior” figure as part of their eco-religion group. Maybe I’ll write about that another time, but it is out of the scope of this article.

Boulder is one of the farthest Left towns in the entire country. It is very similar to Berkeley in that it is a testing-ground and incubator for ideological indoctrination. Finding volunteers to hold signs and shout at the police or at Americans isn’t difficult to do, so they ordered a lot of signs.

That is a glimpse of what the physical production side of the Marxist activist coordination looks like. Does it matter who is footing the bill? The production place will get paid. Does it matter how many signs to produce? The local organizers will know their end of the operation.

How much time do the volunteers need to know in advance in order to drop their kids off with the parents? Two days at most. Using this organizational strategy the Communists can create faux-grassroots movements in no time funded by corporate, private, and grant cash. Your taxes pay into this system.

Now let’s look upstream. Where are these graphics produced? Who comes up with the messaging for The Current Thing to manipulate the people? 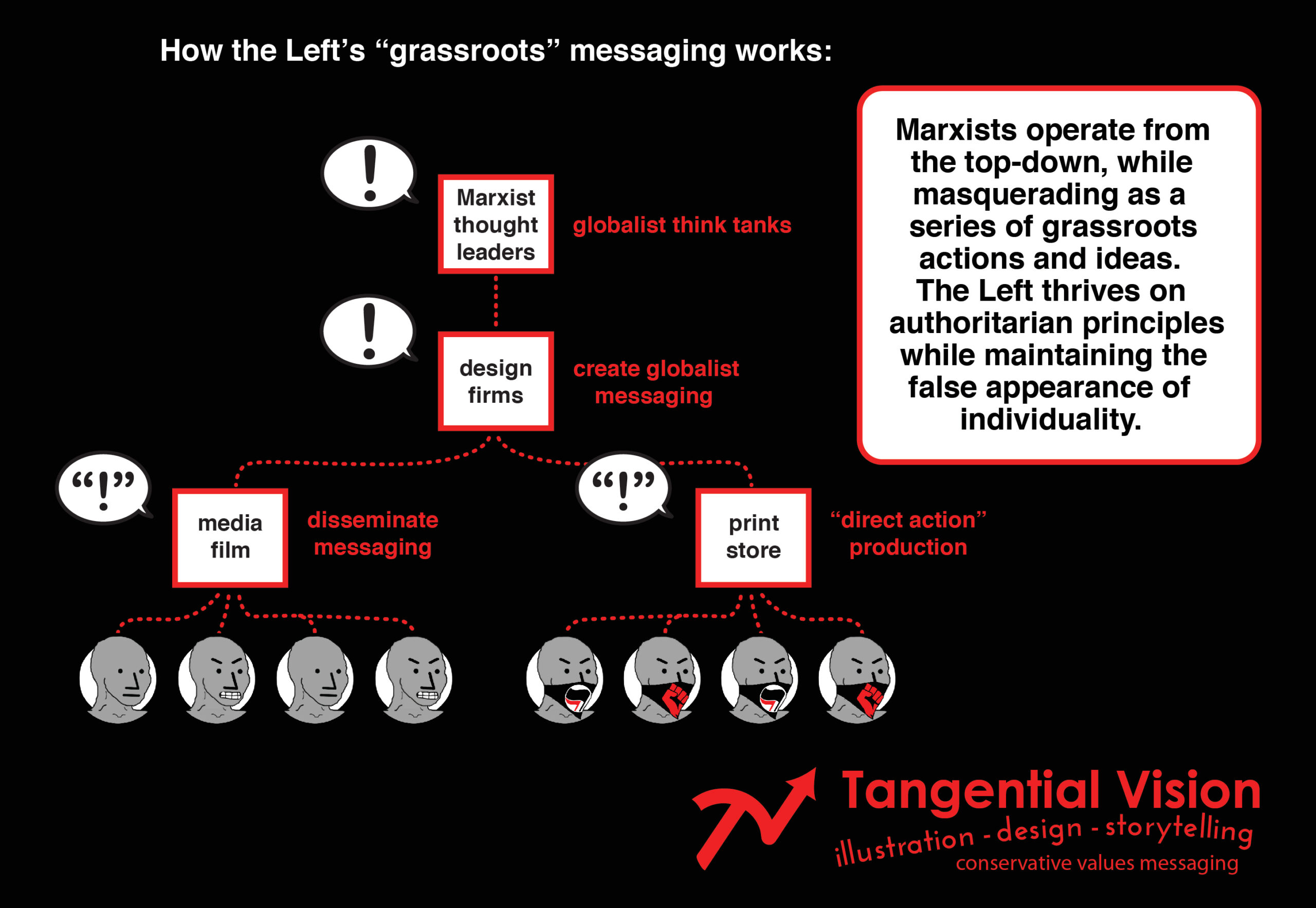 Both sides of the political aisle use “think-tanks” for strategy. The major difference is in the focus. Conservative messaging strategy often focuses on some self-preservation concerns but we don’t really have a long game or push a strong message in general. Our focus is frequently what I would call “the optics of not looking like the bad guy.” We are often reacting the slanders of the Left.

Leftist think-tanks, such as Concomitantly or Third Way, have the strategic benefit of a core ideology (see: religion) to follow. They can confer with their comrades in other nations and have a decentralized momentum propelling them. Leftists truly believe that that Utopia is just around the corner, all they need to do is push each agenda just a little more, one-by-one, and they will achieve their goal. They are order-takers. They are ready to push their own stone wherever the boss points them to.

The think-tanks on the Left (not to exclude the philosophers, professors, and philanthropists) have a theoretical vision of the future that they want. The soldiers don’t know the end goals, they just want to push their stone. The thought leaders however have extensive long-term goals listed out. These are easy to research many of them either go back hundreds of years or are recycled from failed nations over the last few hundred years.

On the smaller scale these goals can be broken up into reasonably easier to achieve mileposts. If the gender ideology needs to be pushed forward another step in the next twelve months subgoals may be created. An example of this would be if a primary social goal requires demonization of a politician combined with pressuring forward the transgender normalization.

This goal is then sent to a specialized professional design firm. The thought leaders create the schedule and the goal, the specialists break it up and craft the imagery. One of the leading Leftist design firms for instance is GMMB.com, amongst others. This tier of design firms don’t need to take public clients as they receive enough in Leftist-sourced funding to really focus on their craft.

Want to conflate an evil orange boogieman with supposed rights abuses? – “Tiny hands off My Rights.”

Do you need to convince people that different forms of sex are equivalent? – “Love is Love.”

Do you want to enculturate a virtue signal to confirm to acceptable social status? -“Love Lives Here.”

Is it time to normalize transgender confusion and to irk traditionalists? – “Gender is Over.”

Does your movement need to bully minorities into compliance? – “Faces of Equality.”

These professional design firms can afford to pass over the casual client. They don’t need to advertise their services. They are waiting, ready to push their own stone as far as they must at the drop of a hat. Does it matter what their services cost? They’ll get paid if they aren’t already on retainer.

The design firm completes the single next messaging design. The mass protest is chosen for the following weekend. The design is tweaked subtly to reflect the next weekend’s primary goal. The design is emailed direct to small Leftist production shops in each targeted city. The design firm needs not overburden the communication with such trivial details as payment arrangements or quantities desired. The print shop won’t ask. They are ready to push their stone the next distance, they don’t need to know.

Conservatives are not order-takers. We are individualists. Conservatives have no broad, overarching vision crafted by well-paid think-tanks.

How can conservatives push back against this massive Leftist messaging machine? Do we have a chance? There is a solution and I believe it can work. Let’s discuss that in the next entry.